Ten Producers and Showrunners to watch out for in 2020 for lovers of television and movies. 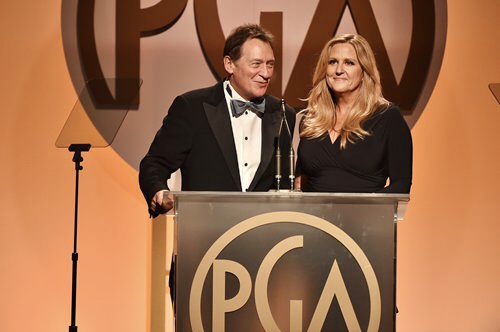 This creative and eclectic group includes some of the most interesting television and film producers that are at the forefront of an evolving industry and that will undoubtedly have a great impact on streaming, television and cinema this year.

Alex Pina
Álex Pina is a Spanish television producer, writer, series creator, screenwriter and film director, best known for the criminal drama La Casa de Papel (Money Heist). This is the first show produced by his own production company, Vancouver Media.The third season of Pina’s sinister criminal drama, Money Heist, broke world records on Netflix this summer, with 44 million homes watching in the first four weeks, the best result for a Netflix series that is not in English. He justified Netflix’s faith in the Spanish writer and producer, who signed a general development agreement with the broadcast giant last year.His new series, Sky Red, began filming in November 2019, while White Lines, a Netflix co-production, is in post-production. The Hollywood Reporter included Pina in their “Best international showrunners of 2019”.

Carlos Montero y Darío Madrona
The creators and executive producers of “Elite” (along with producer Francisco Ramos), a great success that was seen by more than 20 million worldwide in its first month, is a striking example of the global potential of Netflix’s momentum in Spanish production. “Elite” explores the concepts associated with teenage dramas, but also presents more progressive problems that include many diverse sexual themes. The third season will be launched in March 2020.

Park Won Woo
Park Won Woo is the creator of “The King of Mask Singer” from South Korea. The format features celebrities who act anonymously in elaborate costumes from head to toe and unmask if they receive the least number of votes. The format has been adapted in many countries and will be broadcast on Antena 3 in Spain in 2020In addition to this number one s in Southowh Korea, Park has produced and co-produced approximately 200 shows, from local successes to international formats such as “Top Gear Korea”.He signed a First Look Agreement with Universal Television Alternative Studio in November 2019.

Alexandra Fechner
Daughter of the French producer Christian Fechner, Fechner joined her father’s company when she was 20.She launched Fechner Films in 2009 and has been increasing development since then, specifically preparing projects attracting a broad-spectrum audience. She released her first film, “Alibi.com”, a stunning comedy that premiered very strongly in France. This was followed in 2018 by “The Ideal Palace” and she is currently producing a new film “La Guerre des Grands-mères ”(The War of the Grandmothers).

Lee Dong-ha
The zombie movie “Train to Busan”, produced by the talented Korean, Dong-ha Lee, was the highest rated movie at the box office in Korea in 2016 and achieved excellent results from overseas sales from 156 countries. He received the award as the only Asian producer selected in “Variety’s 10 Producers to Watch.” He also produced the animated prequel to ‘Train to Busan” entitled “Seoul Station”, which won the Best Animated Film Award 2017 at the Asia Pacific Screen Awards. He continues to produce films of various genres and materials.

Charlie Brooker and Annabel Jones
Brooker and Jones are a creative team adored by their peers and it is said that Netflix is making a great push to make a First Look Agreement with them.They are best known for Black Mirror, a British science fiction anthology television series created by Charlie Brooker. He and Jones serve as Showrunners of the show. It examines modern society, particularly with regard to the unforeseen consequences of new technologies. The episodes are independent, usually set in an alternative present or in the near future, often with a dark and satirical tone.Black Mirror has grown from its humble beginnings as a modest television show to a global Netflix phenomenon, with extraordinary episodes that won three consecutive Emmy Awards for Best Television Movie.

Carlton Cuse
Cuse, the American co-creator of the drama series “Lost”, has been very quiet since signing a four-year, $ 20 million contract to return to ABC Studios.Cuse, who continues to produce the Amazon “Jack Ryan” action series after leaving his role as a day-to-day showrunner and is now deeply involved with the Netflix comic adaptation, Locke & Key, a horror / fantasy series that revolves around three brothers who, after the horrible murder of their father, move to their ancestral home in Massachusetts only to discover that the house has magic keys that give them a wide variety of powers and abilities. Little do they know, a tortuous demon also wants the keys, and will stop at nothing to reach them.

Pat Andrew
The silent negotiator and former executive of Wanda-Halcyon Television and Spelling Entertainment Inc. of Aaron Spelling has a unique track record for being a former assistant to the powerful, democratic and “Creator of Kings,” Pat Marcy, in the First Ward of Chicago. Andrew was also a former personal assistant to the Hollywood icon, Sydney Korshak, in California.Andrew and his partners have secured a behind the scenes exclusive joint venture production rights and have arranged financing for some of the hottest streaming properties being launched in 2020 to include ” Marked-The Unforgiven”,” Smoking Gun-A Murder Mystery “,” Synchronicity-The Beauty Whisperer “and” MobKing “by Ciro Dapagio, which many consider to be “The Sopranos “of the social media networks.

Peter Morgan
Morgan is the creator and writer of the Netflix historical drama series The Crown – a biographical story about the reign of Queen Elizabeth II.The 56-year-old Brit has signed a huge overall TV and film deal with NetflixThe overall deal will also include projects by Morgan outside of The Crown, including feature films and is said to be valued well into the eight figures, with some sources speculating that it could potentially cross the $100M mark.

Phoebe Waller Bridge
British talent, Phoebe Mary Waller-Bridge created, wrote and starred in the BBC comedy and drama series “Fleabag” (2016-2019). She was also the Showrunner and Executive Producer of the first series of the BBC America thriller series “Killing Eve” (2018-present). Both “Fleabag and” Killing Eve” have been highly acclaimed and named among the best television series of the 21st century.Two days before sweeping the Emmys for the final season of Fleabag, Waller-Bridge signed a $60 million deal to make more TV for Amazon. That’s on top of her commitments to BBC America’s “Killing Eve” and upcoming HBO comedy “Run” from best friend and collaborator Vicky Jones.