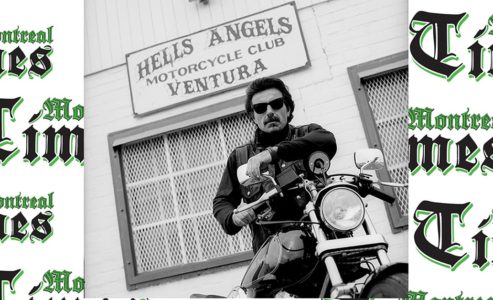 The characters are fictional, but stories will be based on real situations, in the forthcoming television crime series “The MobKing.” Although set primarily in South Florida, the show will have a connection with Montreal, in the form of an outlaw biker played by George Christie, the former real-life leader of the Ventura, California chapter of the Hells Angels.

“The MobKing” centers on a character named “Mike White” (actor Ciro Dapagio), owner of a Florida gentlemen’s club and partner in a new Indian casino. In the series, White befriends Christie’s character, “Alex Gus Ventura,” the former leader of a powerful Canadian motorcycle club called “Unforgiven,” who is fresh out of prison and trying to climb his way back up the hierarchy of biker society. In addition to playing a supporting role in “The MobKing,” Christie will serve as a technical advisor.

“I’m excited to be working on this project,” he said. “Outlaw motorcycle clubs aren’t always depicted realistically in movies and TV shows. I spent most of my life with one and I have been to prison, so I know what really goes on.”

In real life, most of Christie’s involvement in the biker world was confined to the United States, but he is familiar with Montreal’s biker history, and he knew some of its leaders.

“Years ago, there was a biker club called Rock Machine, which then became The Bandidos,” Christie said. “They were arch rivals of the Hells Angels. I sneaked up to the border a couple of times to make sure things didn’t get too far out of control. I was involved with peace talks to keep a Scandinavian biker war from bleeding over into the United States and Canada.”

Christie founded the Ventura, California chapter of the Hells Angels in the 1970s, and was president for nearly four decades. He left the club in 2011 and is now a writer and consultant. In 2015, he was the focus of the highly rated History Channel documentary series, “Outlaw Chronicles: Hells Angels.” More recently, he has also been starring in “Outlaw,” a one-man stage show, based on his life, with performances in Southern California, Las Vegas and St. Louis, Missouri. He is also the author of three books about outlaw motorcycle clubs, including his memoir, “Exile on Front Street: My Life as a Hells Angel…and Beyond.”

“George Christie has been a fantastic source to assist our writer group in understanding the three-dimensional lifestyle of a leader in an outlaw motorcycle club,” said Sutish Sharma of New Street Pictures, one of the producing partners of “The MobKing.”

“George’s experience has provided great authenticity,” added showrunner Pat Andrew of Wanda-Halcyon Television. “His natural leadership and complexity came through in his audition.”

As a six-part web series, “The MobKing” garnered millions of views on YouTube and other platforms. Now, producers are set to shoot twelve full-length episodes for television distribution in more than 42 countries. The series will be filmed in London, England, at Marbella Film Studios in Marbella, Spain, and locations in South Florida.

More information is available at www.themobking.net and  https://www.imdb.com/title/tt6370942/.